It has been a few months since last Local Native v0.4.0 release, which introduced (wireless) syncing via tarpc, database schema change and more. That is decent amount of internal data structure change and observable new features. Everything was well and I was not worrying about rushing out more features very soon, until ..

In contrast, this v0.4.1 release is only motivated by fixing the one observed bug:

the touch input keyboard for the share extension's text fields (tag and description fields etc..) does not show up in iOS, after upgrading to newer version (iOS 13.2.2 as of writing). This prevents user to input tag or description, or change title or url for the note.

Saving note still works, but what's the fun if I can not add tags to a note?

Technically This is a new feature only in newer version of iOS. How hard could be

It turns out just one liner to not show the keyboard by default. Then keyboard will show up when user tap the input box.

However ironically now I get all other v0.4.1 release targets (android, web-ext, appimage, dmg) built and release, but still without iOS. It works in local build but crashes only in ‎TestFlight.

I am still debugging this crash.

Apple has released macOS Catalina, upgraded iOS and Xcode. Multiple (minor) versions with fixes are coming frequently in the past month.

I am still debugging this crash only in ‎TestFlight.

Is this a sign that I may just need to switch to SwiftUI?

Not only Apple, everything is moving at

the speed of light.

It turns out this release is just trying to catch up with the right dependency upgrades:

I've given a talk at Rust NYC for its 2019 September Meetup.

Above is the screen capture video remake when going over the slides again with my HXNYC 2019 class.

As hinted in the previous post, this v0.4.0 release is a MVP to show sync between different devices using slightly patched tarpc . Currently sync works between desktop and desktop, desktop and mobile when they are on the same LAN/WiFi.

The schema of note table is updated to have an extra uuid column to uniquely identify and dedup records for sync. At the end of sync operation, both devices will end up with same set of uuid by appending the diff from the other device.

Mobile device can scan a QR code encoding the server address and port to connect to the server to start sync. 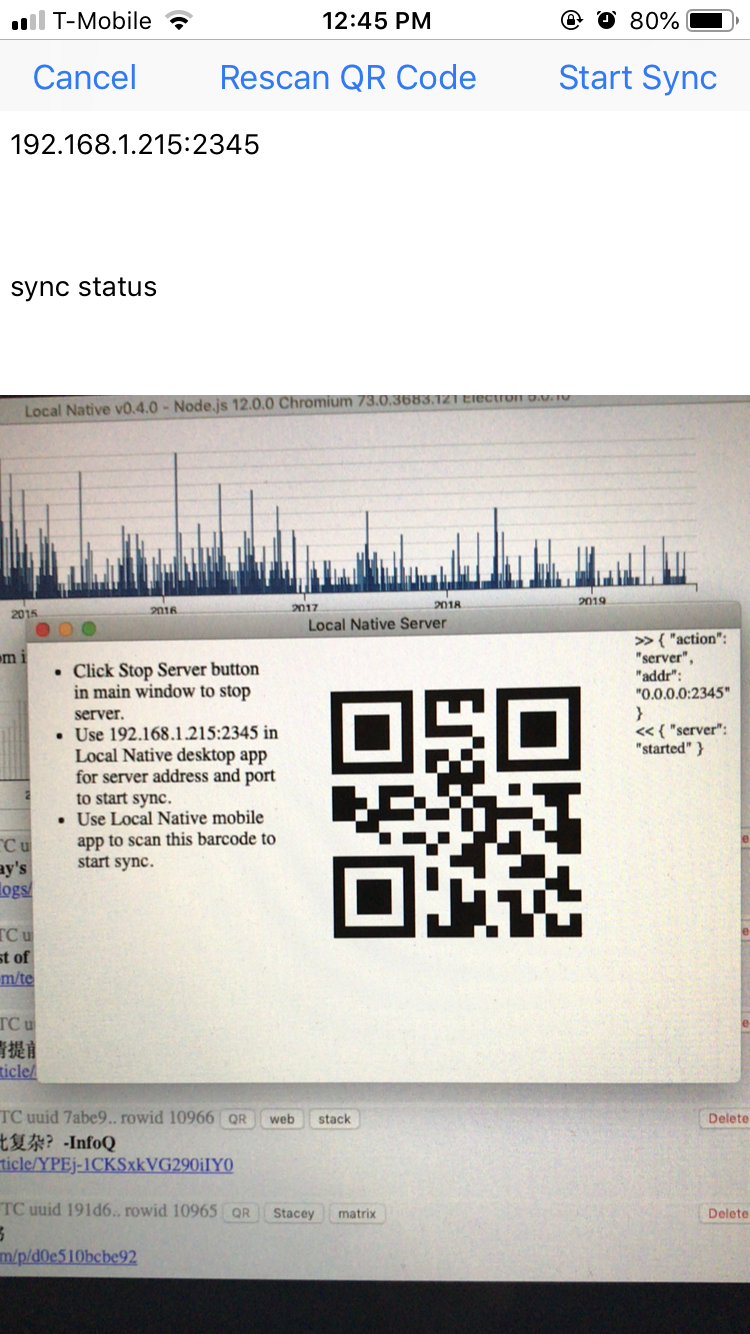 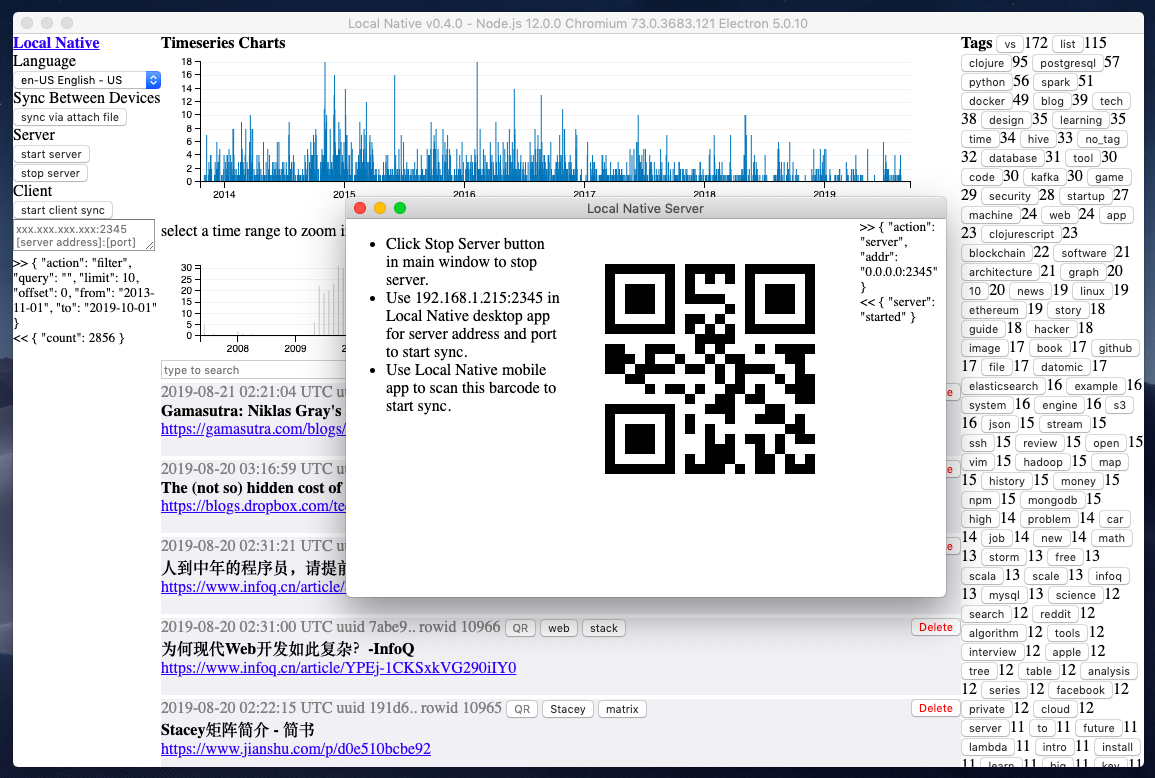 I have not cut a release yet, but the work-in-progress Local Native v0.4.0 introduced a new uuid4 field into note table.

This serves as a unique key for each record, syncing between different devices could leverage this new column. Actual code for syncing is still yet to be written. The idea is uuid4 could be used as a record identifier to compare with records with other devices.

I considered using key based on actual content, but decided that's too much and preferred true randomness.

To migrate v0.3.x schema to v0.4.0, an upgrade sub module is also written to create a meta table with version and is_upgrading value, so far on all my devices it worked. It is truly written the Rust code once, and run it everywhere, otherwise how many lines of Swift, Java or JavaScript need to be written!

This schema change might already break the ssb sync code.

I tried to tackle the syncing problem before. The wired sync is not convenient. Sync via ssb the keys setup steps seems cumbersome (Yes, some UI could be put on top of it to make it feel better), but there are 3 real issues I see it is not fit to at least my desire:

I decided sync over LAN or WiFi when devices are on the same local network with a different protocol should be my next bet.

I started higher on the stack, even looked at GraphQL, then just try to spin up HTTP server in rust, then hit some build error on Android for openssl. The dead body of localnative_sync is the experiment.

Then looked at gRPC, seems also too heavy, I have not tried but it seems could also be challenging to compile natively on mobile device. Then come to tarpc. I can get it running on iOS!

So here it is, the code now have tarpc as a dependency.

Like any FLOSS libraries, those supported by large players might have a better chance of being actively maintained and being aligned with the "trend".

I recalled Bytemaster once had chosen Wren but then switched to WebAssembly for EOS VM.

There are many JavaScript web frameworks, there are also Node.js for mobile apps. Rust should do the same.

I also recall in the old days we 8 teenagers rushing into an internet cafe, ironically it's not connected to internet but just 8 PC connected to a router. Then the group just playing StarCraft for hours, no cloud subscription, no need for earphone but directly shout to your teammates, and you can also shamelessly perform physical distraction to your enemy commanders for the win.

I miss those days.

It's straight forward to setup Open Collective (takes 10% with fiscal host) and Pateron (takes 8% with tier and goal features).

The tier setup and wording may still need some tweaking, much inspiration from [redox](https://www.patreon.com/redox_os) and [manyverse](https://opencollective.com/manyverse).

Prior art for reference. 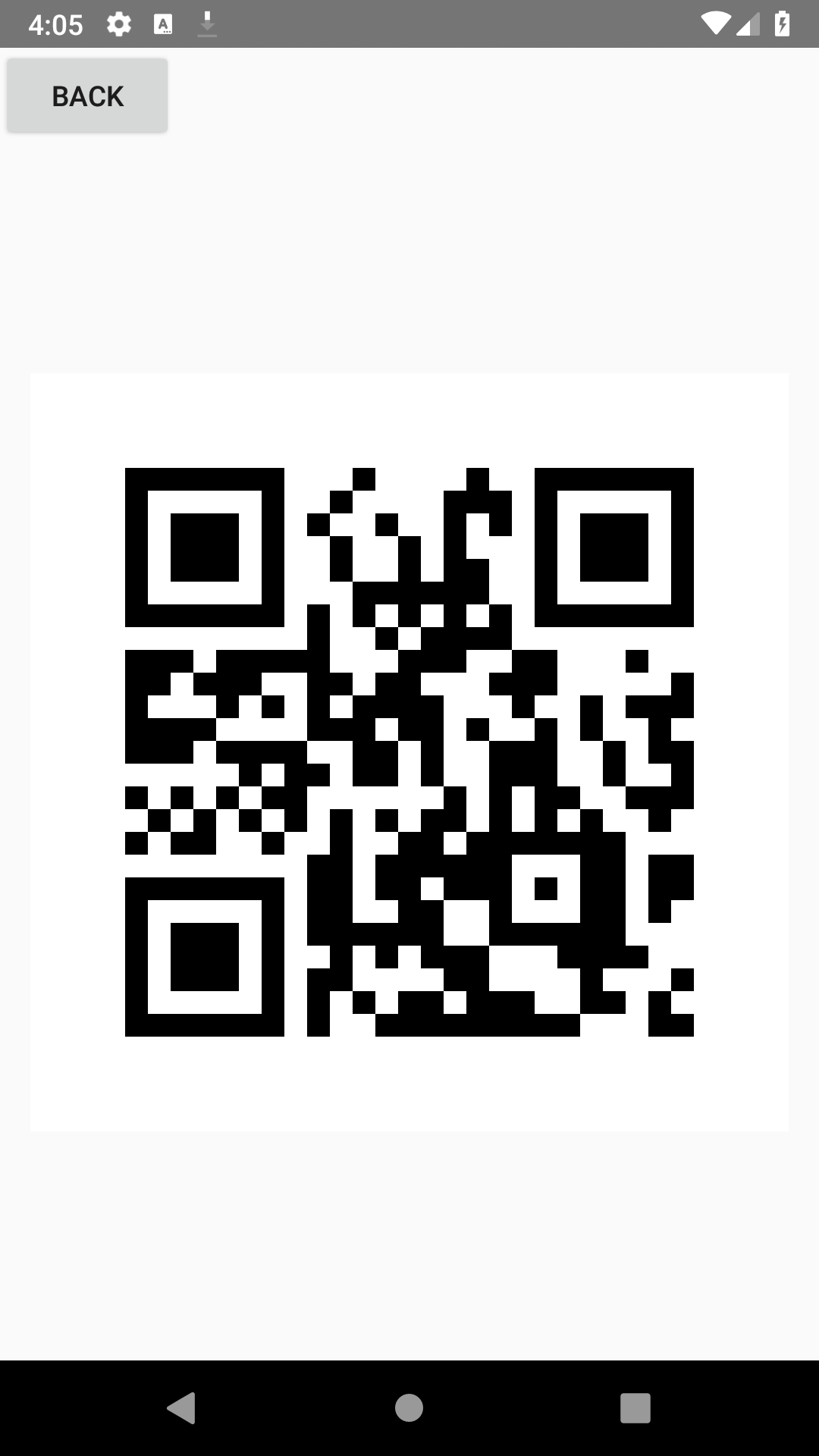 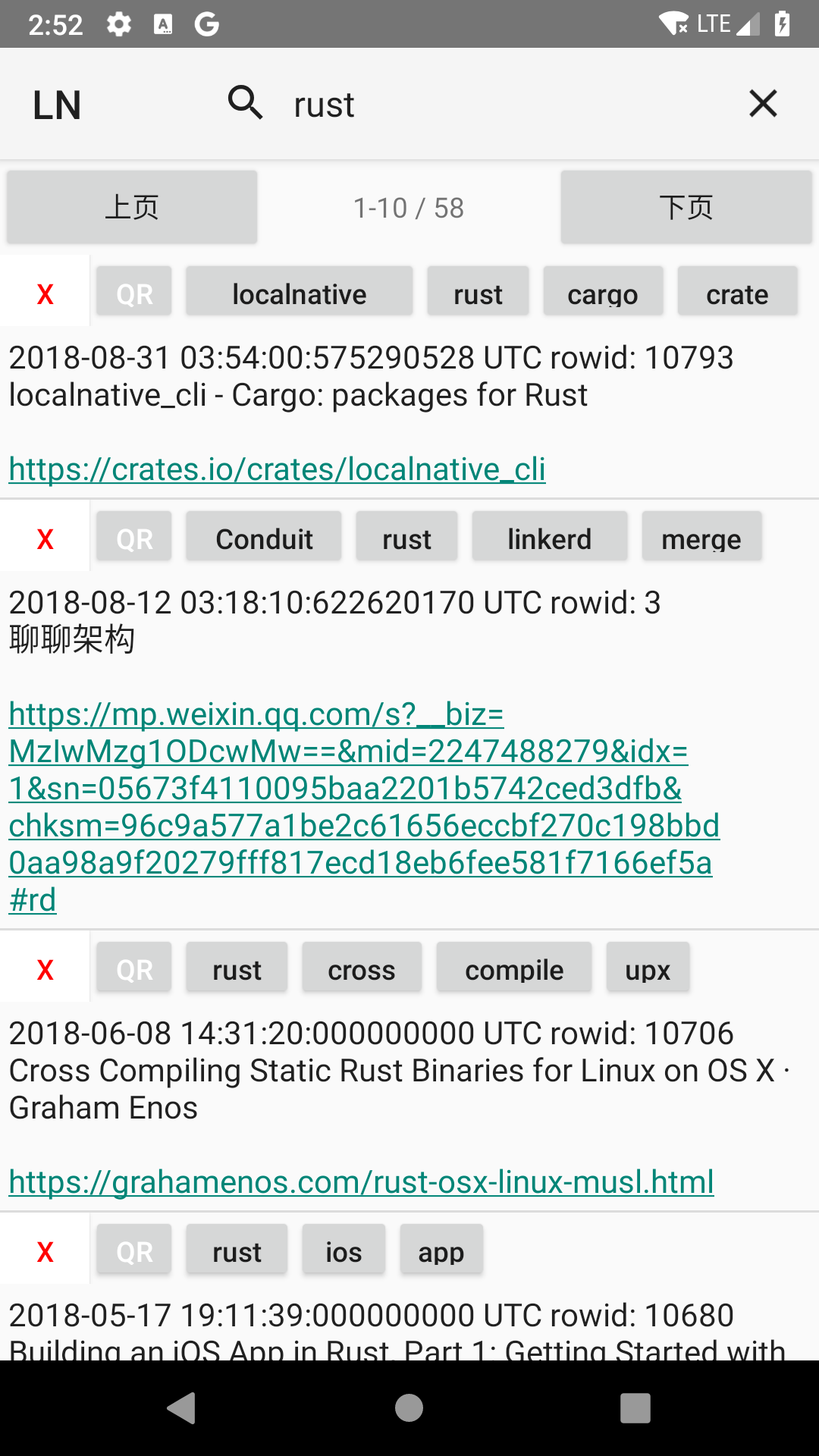 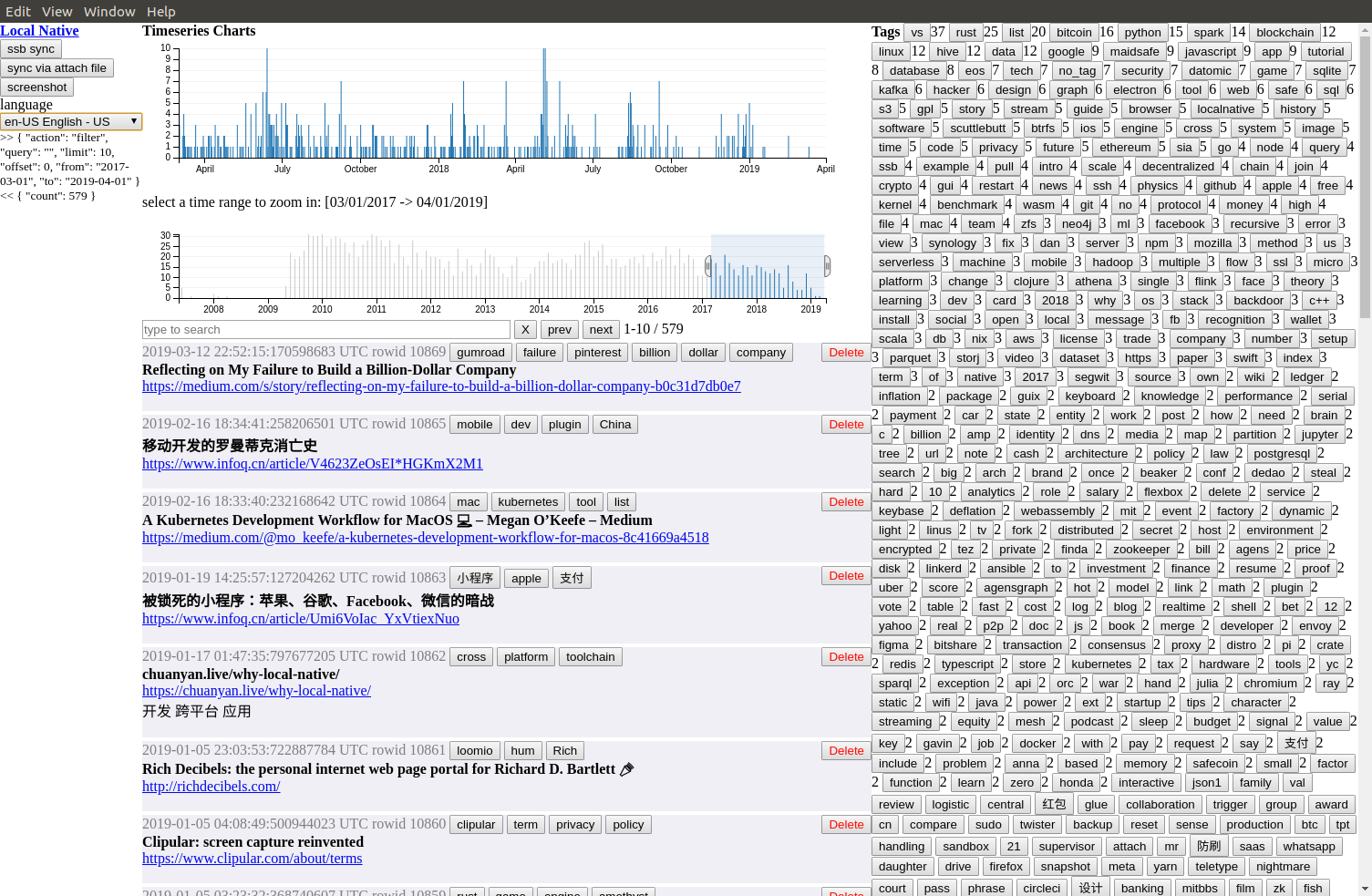 About sync with other devices

Maybe the biggest drawback of not using a centralized service is losing the "convenience" of everything synced on every device.

Kown quirks could be improved

There are definitely plenty room for improvements, some known ones among many others:

However, given this release now satisfied my day to day bookmarking needs, my limited spear time will be mostly on trying more aspirational things.

This serves as the proof that one has a choice to not use a centralized service to manage web bookmarking and note taking.

It seems applications today are "Cloud Native" by default. For end user, it becomes expected for a "meaningful" application to have all its data available on all the devices all the time. However this assumed convenience comes with drawbacks:

Network is still slow, hence caching and syncing cache with remote datastore is a normal practice to boost user experience at the cost of draining device battery.

What if things are stored locally natively?

When I was implementing the type ahead search for Local Native App, a brute force database query upon every keystroke just worked. Scaling issue seems goes away if you do not need to deal with network latency and multiple users competing with each other for CPU. I start to appreciate how fast the hardware becomes today.

I used to have tens of social media profiles out of curiosity to checkout "what's on the internet". Util time itself becomes increasingly limited resource, and I figured most of the time I just need a bookmarking tool for the internet, so I can go back to something quickly, and maybe also run some SQL against those url and tags myself.

What if things are stored locally natively?

Without a traditional remote server, syncing across devices does become a challenge, but opportunity may lie here as well. Local Native App currently is able to sync via ssb, with some serverless setup first.

Toolchains today seem are all for centralized services, but 15 years ago where are those toolchains for modern mobile and web apps? 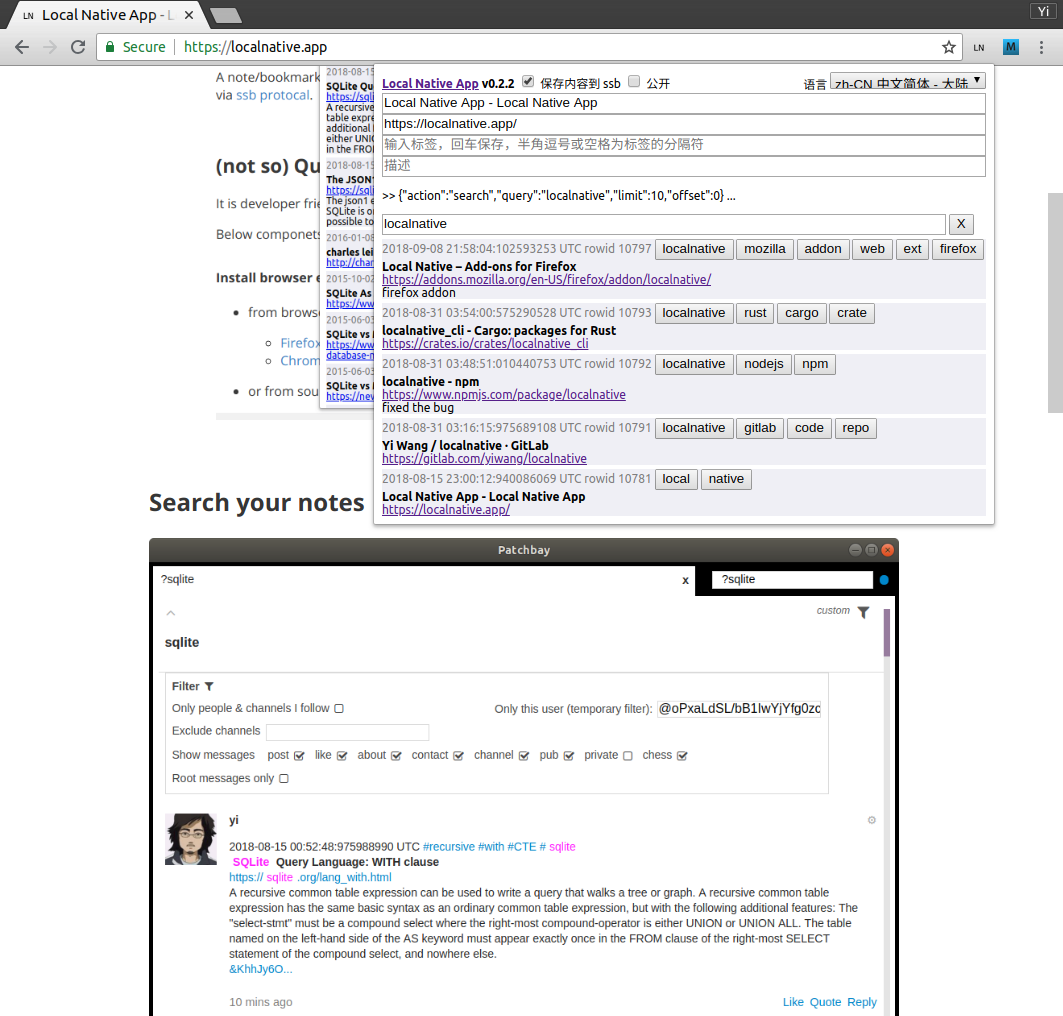